Lately I’ve been thinking about how different my boys are from each other. I thought it would be fun to do a post of those differences as I may want to look back on them as they get older (sob).

Monkey slept in a co-sleeper for the most part from the time he came home from the hospital until around 3 months old. At that point, he would start the night in the co-sleeper and at some point end up in bed with us 🙂 When we brought the MM home, I tried over and over and over for the first 2 nights to get him into the co-sleeper. He would last maybe 5 minutes and then wail. My mom, DW and I took turns over that two night period being up with him. I was so exhausted, that on night 3, I clipped the old Snu.za breathing monitor onto his diaper, ensured that pillows and blankets were safely away, and climbed into bed with him. He slept soundly for 4 hours, nursed, and slept another 4 hours. And from then on, he’s been in the bed with Mama.

Monkey loved being swaddled. We swore by the Swaddle.Me as the velcro kept him snug and secure and he had a hard time getting himself unswaddled (as when that occurred, he was up). The MM HATED being swaddled with a passion. I’d heard that some babies resist but that they really do want it, so I tried repeatedly with various wraps and blankets and was always met with resistance and struggle. He slept just fine without being swaddled. He would turn onto his side facing me, nurse, and go right to sleep. That side-sleeping was scary to me at first, but it was what he wanted (and we had the trusty Snu.za) so I was just extra watchful.

When Monkey was too big for the swaddle, we switched to sleep sacks. He was nice and cozy in his sleep sacks and seemed to sleep well in them. The MM? Hates them. Doesn’t want anything constricting his movement at all. When he gets the sheet put over his legs in bed, he immediately kicks it off. All those adorable, cozy sleep sacks sit unused, waiting to be given/sold to a baby who wants them.

Monkey’s sleep issues are well-documented on this blog. He loved getting up in the middle of the night for an hour (or three) and has always been up EARLY. He is almost 5 and the early rising trend continues. The MM has never in his 18 months awakened for any length of time in the middle of the night. He has consistently slept until 6-7AM. Mama and Mommy are so thankful as I’m not sure what we’d do if both of them were sleep maniacs.

Both boys were exclusively breastfed for the first 6 months of their lives. Monkey’s first food was rice cereal with breastmilk and he loved it. He took to eating like a pro and loved pretty much everything we put in front of him. The MM’s first food was also rice cereal with breastmilk and he HATED it. In fact, he had very little interest in solids until close to a year. He would try things, but never really had a meal or anything until around 1. Monkey loves breakfast and has oatmeal and applesauce pretty much every day. The MM is not really interested in much food at breakfast time. He eats lunch and dinner much more readily.

It took Monkey quite a while to figure out sippy cups, but the MM had it down quickly. He can drink out of a regular cup, too (though he spills a bit).

Monkey has never been much of an independent player. He wants someone to play with him, help him build, etc. The MM can keep himself occupied for long periods of time. He loves his toys and will go in search of specific items to play with.

Monkey has never really cared about what he wears. We pull out clothes and he wears them. The end. The MM is only 18 months old but he has Opinions on what he wears already. His favorite shirts are Paul.Frank shirts featuring Julius the monkey (we have several from when Monkey was little) and an Elmo shirt. He will open his drawer and rifle through until he finds one of these shirts, pull it out, and push it towards us. He cries if you try to put another shirt on him. Often it’s not an issue, but some days it simply MUST BE A MONKEY SHIRT! Hahahaha.

We “discovered” a new show that we got hooked on with each boy. With Monkey, it was Keeping Up with the Kardashians. I know, I know – what can I say? At 2AM, it was all I could find that was halfway watchable, E! ran them back to back overnight, and I found those girls entertaining in their warped ways. We stopped watching a couple of years back, but we were on-board for a while there.  With the MM, the only thing that was on in the middle of the night was 48 Hours. My mom, DW and I all watched it overnight (OWN ran them back to back all night long) and would even update each other on the outcomes in the morning (LOL). We still DVR 48 Hours and even added Dateline to the mix. There is some seriously crazy sh*t going on out there, people.

what we’re up to

We are exactly 1 week away from the Marshmallow’s first birthday. I can’t believe it – it has gone SO quickly. That wasn’t really the case with Monkey, so it’s a surprise this time around. We were going to have a party for the MM’s birthday at Grandma’s house next weekend, but most of the people we invited couldn’t make it. It was a family-only party and half the family has a time-share that weekend that we were unaware of. Sigh. We are still going to set up a little party for him at Grandma’s Sunday but it’ll just be us, Grandma, and DW’s aunt and cousin. Maybe we’ll see if some friends want to come to our place on his actual birthday to sing and have cake and ice cream. I feel bad as we did a big shindig for Monkey’s first, but things are just different now. We are busier with two kids, a lot of our friend couples have broken up and things are awkward now, and the MM doesn’t have little friends his age like Monkey did. DW is going to start getting out there and making new mommy friends with babies – poor second child syndrome. I reminded her that Monkey was in Gym.boree classes and being taken to events daily when he was like 6 months old. (Yes, we plan on getting the MM into Gym.boree soon.)

See? We really did have a party planned 😦

The MM is doing a lot of finger walking and standing on his own lately, so I imagine he’ll be walking pretty soon. He has 2 teeth coming in, and they are causing obvious discomfort. I think I may invest in an amber teething necklace to see if it helps. Poor boo is so cranky and miserable and that is not my sweet, mellow man’s general mood. Baby is in 12-18 month shirts/onesies and 6-12 month bottoms – his brother was the same. Big and broad up top, small below. The MM loves all toys and loves to play. Lately he’s really into balls. He will throw them, lay across them on his belly, roll them, etc. His sleep is still pretty good, though nursing at night is still a challenge. I’m trying to muster the strength to night-wean as I said I would at 12 months, but my resolve is not very strong. He is my last baby and even though I’m tired, I so enjoy those precious nighttime cuddles. He is still not doing much eating, either. He’ll do pureed baby food, but actual solids? Not so much. He chokes and spits it out. We keep trying so here’s hoping he catches on soon!

I need to figure out this nursing thing because I’ve been doing a lot of work travel lately. A couple of weeks ago, we went to San Diego for a conference. Last week we were in Northern California as I had a presentation to do at an internal summit. Luckily it was also Monkey’s Spring Break, so he didn’t miss any school and we would have had to find stuff to do anyway. I’m going solo for a nearby trip in mid-May (fly in and out the same day). On our trip home, we flew in, picked up our bags, dragged everything/one to the car, strapped the kids into their carseats, turned the key in the ignition and… DEAD CAR! UGH! I called AAA and they were running behind and said they’d be there in an hour and a half (!!!). I was like, “Seriously??? I have 2 small kids here!” Fortunately, they put a rush on our ticket and someone was there within 15 minutes. They gave us a jump and we went home. We had tickets to see Neko Case that night (purchased prior to knowing about this work trip) and we had to miss it as the car wouldn’t start. Bummer and a relief as I was really wanting to just chill out in my jammies. We got a new battery put in on Friday and all is right in car land again. 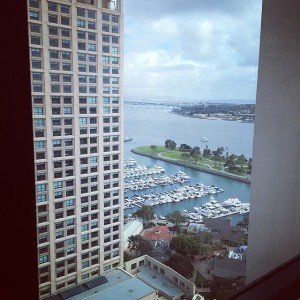 We had a nice and busy Easter weekend. Saturday we went to a friend’s birthday party at a local park (a fireman theme and they had an actual firetruck show up!) and then went to another friend’s place for an afternoon play date where we had an egg hunt. On Sunday we did the whole Easter basket thing, dyed eggs (whoops – was pretty late this year), and then went to Grandma’s and had an egg hunt and more little baskets.

I finally indulged in a major pregnancy craving last night: chili cheese fries! DELICIOUS! Want to know when I last had them? You guessed it, during my pregnancy with Monkey 🙂 I was feeling so nauseous and gross all day yesterday and was just ravenous at dinner time so I went for it. No regrets!

Other cravings this pregnancy (that I have yet to indulge) include: 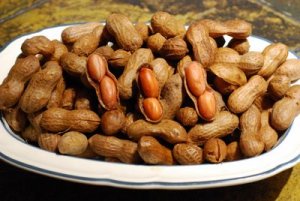 I have continued my trend of eating a lot of green apples as I did during my last pregnancy. The sour taste really helps curb the morning sickness.

I’ve had some strange aversions this time around. I simply can’t eat grilled cheese sandwiches or quesadillas. These are staples in our house, so it’s created a bit of a dilemma. Weird since last time around in the first trimester, I ate so much plain cheese pizza because it was all that I could manage.

Here is an update on what Monkey is up to lately, one week before his second birthday. Thanks to strawberry at 1 in Vermillion for the great categories!

I have some time to kill before my next meeting so… here’s an actual post! Monkey is 21 months old. He is wearing 2T shirts and 18-24 month pants (he’s big on top and small on the bottom). His shoe size is 6-6.5, depending on the shoe. He is about 34″ tall and weighs around 27 lbs. And now I’m moving to bullets 🙂

And that’s what’s happening in the world of Monkey.

Day 7 – What’s your favorite thing to eat for breakfast, lunch and dinner? If you have children, what are their favorites?