Over the weekend we crossed another couple of items off the bucket list and added another new one! I attended a conference at a FABULOUS resort just south of us. But before I get into how insanely luxurious and wonderful it was, we also rode go-carts on the way down! DW noticed a Boom.ers on the drive to San Diego last time we went and really wanted to drive go-carts. We looked it up and discovered that Monkey is tall enough to drive on the small, little kid track and to be a passenger on the big track. Our hotel check in time wasn’t until 4, so we took a pit stop! (See what I did there?)

First, let me say that Boom.ers exists in the same hellish category where Chuck.E.Cheese resides. OMG hate. That said, the go-carts were a blast! We put Monkey in a car on the kiddie track first. He had no clue what he was supposed to do – “Put on your seatbelt.” <Blank stare> “Push the green pedal with your foot.” <Blank stare> But once he figured it out, he tore it up. He had his pedal pushed to the metal and took the turns like a champ – only got stuck on the side once. Of course, when it was time to stop, he completely ignored it and ran over the stop sign (DOH!) and then after the guy running things said, “Do not hit the car ahead of you,” bet you can’t guess what happened… I felt bad for the guy and we did what we could from the sidelines, but you know, he’s 4. He had so much fun and looked so cool doing it, too.

After that, DW took a turn driving him on the big course and then it was my turn. I had never driven a go-cart before (this stunned DW). It was super fun, but kind of stressful, too. I never knew when someone was coming around me! Monkey was killing me yelling, “Oh my God!” No idea where he got that from (seriously – we never say that). I laughed and told him to say gosh instead so as not to offend anyone and he actually obliged. Still, it was hilarious as we’d round a corner and he’d cry out, “OH MY GOD!” LOL!

DW and I really wanted to leave at that point, but there was a huge room full of video games, so you can guess where this is going. Monkey played a few games and we bribed him with some candy to get out of there. Still, I’d do it again just for the awesome go-cart action.

Then we were on way to the ridic resort we stayed in Sat-Tues. This place? Pure opulence. Our room was huge and had a big balcony overlooking the main lawn. So beautiful. The bathroom was a dream – huge soaking tub with separate shower. The boys and I got in the tub every night and even made use of the lavendar sea salt bath crystals provided.

View from our balcony

There is a golf course between the hotel and the beach (natch), so they shuttle guests down to the beach, where an employee sets up an umbrella, beach chairs, and towels in your preferred location. Oh, and they gave each boy a bucket and shovel on check in. The beach was gorgeous and both boys had so much fun playing in the water and the sand (see new header photo for evidence). This bodes well for our week-long beach trip next week.

Monkey at the beach

We had room service a few times (just easier with littles at a fancy shmancy hotel). While I attended the conference on Mon, the family went to the Mission in San Juan Capistrano. DW loved it and said we absolutely have to stop on one of our SD trips so I can check it out. In the late afternoon, the family went for a swim in the kid pools (one was 1.5′ deep and the other 4′ deep). We ordered up a bucket of ice cold Cor.ona Light and had ourselves a nice cocktail hour.

Monkey at the Mission 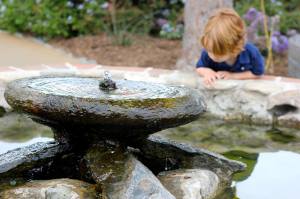 That night after we put the kids to bed, we had a cocktail out on the balcony and watched the sun go down. So. Awesome. We had planned to do this all 3 nights, but DW fell asleep putting kids to bed the first night and we both fell asleep putting them down the second night. (Both boys were up at 5:20AM all 3 days, so Mamas were pretty beat.)

On the last day there, I won a $200 gift card to the hotel during the conference! Sounds awesome, right? But we had to check out at noon so I spent about 15 minutes playing all you can grab in the gift shop. I was really hoping to score some resort-branded beach towels, but alas they were not to be had. I ended up with a branded beach bag, a pair of sunglasses, and some toys for the kids. I “paid it forward” by giving the remaining $10 to the person behind me in line 🙂

Now, I’ve shared the Face.book, happy-happy-joy-joy version of the trip but rest assured, it was not easy or super relaxing. See ridiculous wake times above. See also Monkey in all his 4.5-ness, not listening, being totally wild, messing with the baby constantly, etc. Let’s not even discuss the epic argument DW and I had on check-out. Ugh. Still, we had a good family time at a place we’d not be able to afford otherwise (thank you work), so I call it a win!